Is Your Business Ready for a Recession?

How Can Business Owners Prepare for a Recession?

We asked small business owners when they expect a recession will happen and what they’re doing to get ready. 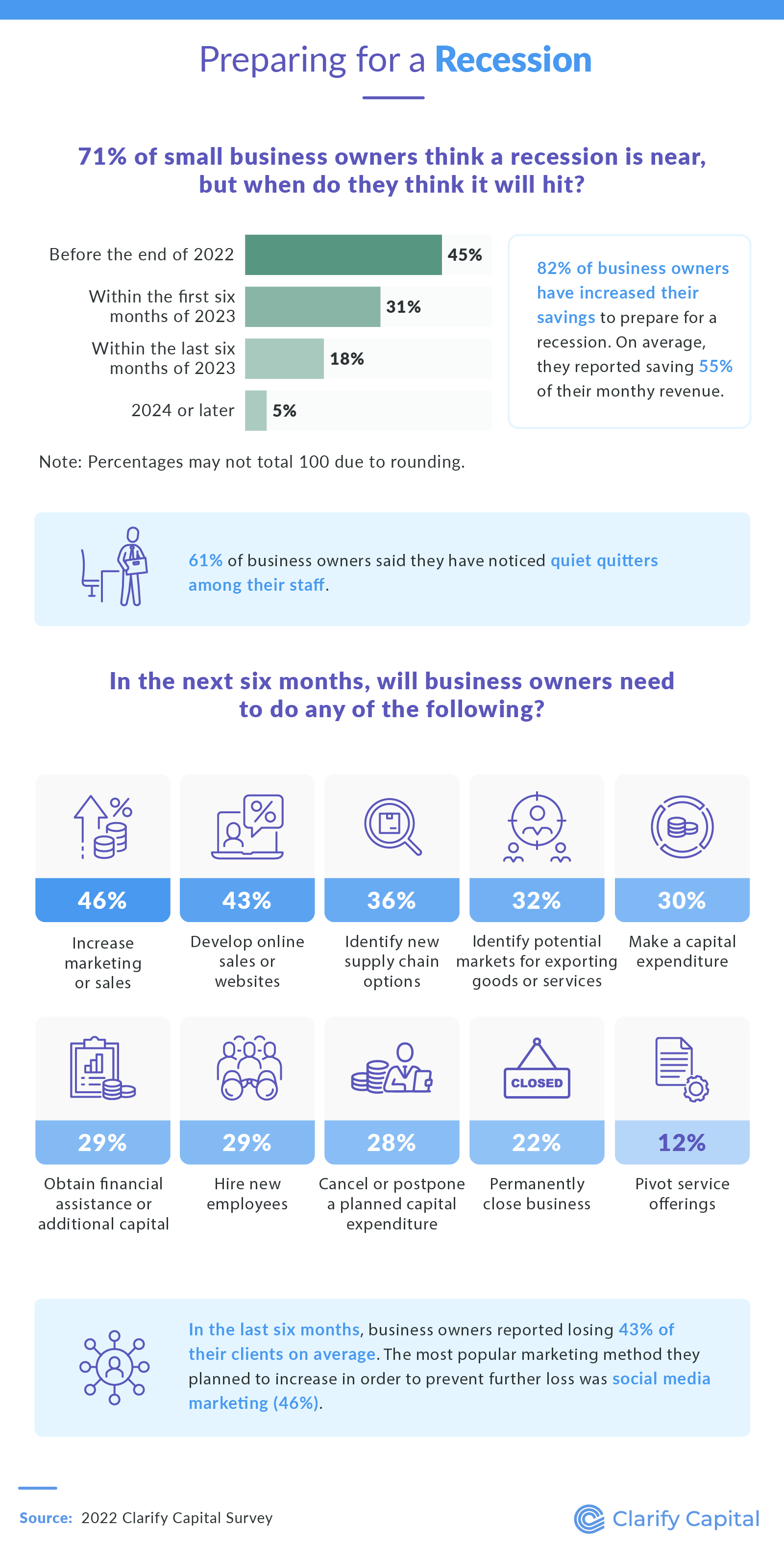 Of the 1,000 business owners surveyed, 71% said they think a recession is near, with 45% believing it will happen before the end of 2022. This tracks with Bloomberg's estimates that there's nearly a 50% probability of a recession occurring in the next 12 months. A collective 49% of our survey respondents believed the recession would hit sometime in 2023, and only 5% expected it to happen in 2024 or later.

To prepare for a potential recession, 82% of businesses have increased their savings, saving an average of 55% of their monthly revenue. However, those that have been open more than 10 years were the least likely to have begun saving for this, possibly due to having more experience or existing savings. These older businesses were also less likely to plan capital expenditures such as purchasing land, buildings, or equipment in the near future compared to those that have been open for two years or less, who were 72% more likely to do so.

To curb the potential effects of a recession, all businesses have changed their operations or planned to in the next six months. The most common change was increasing marketing or sales techniques, with 46% of respondents planning to spend more in those areas — especially businesses that have been open for six to 10 years. Some of the marketing tactics business owners planned to increase amid a recession included influencer marketing (14%), traditional advertising (13%), email marketing (13%), and SEO (7%). 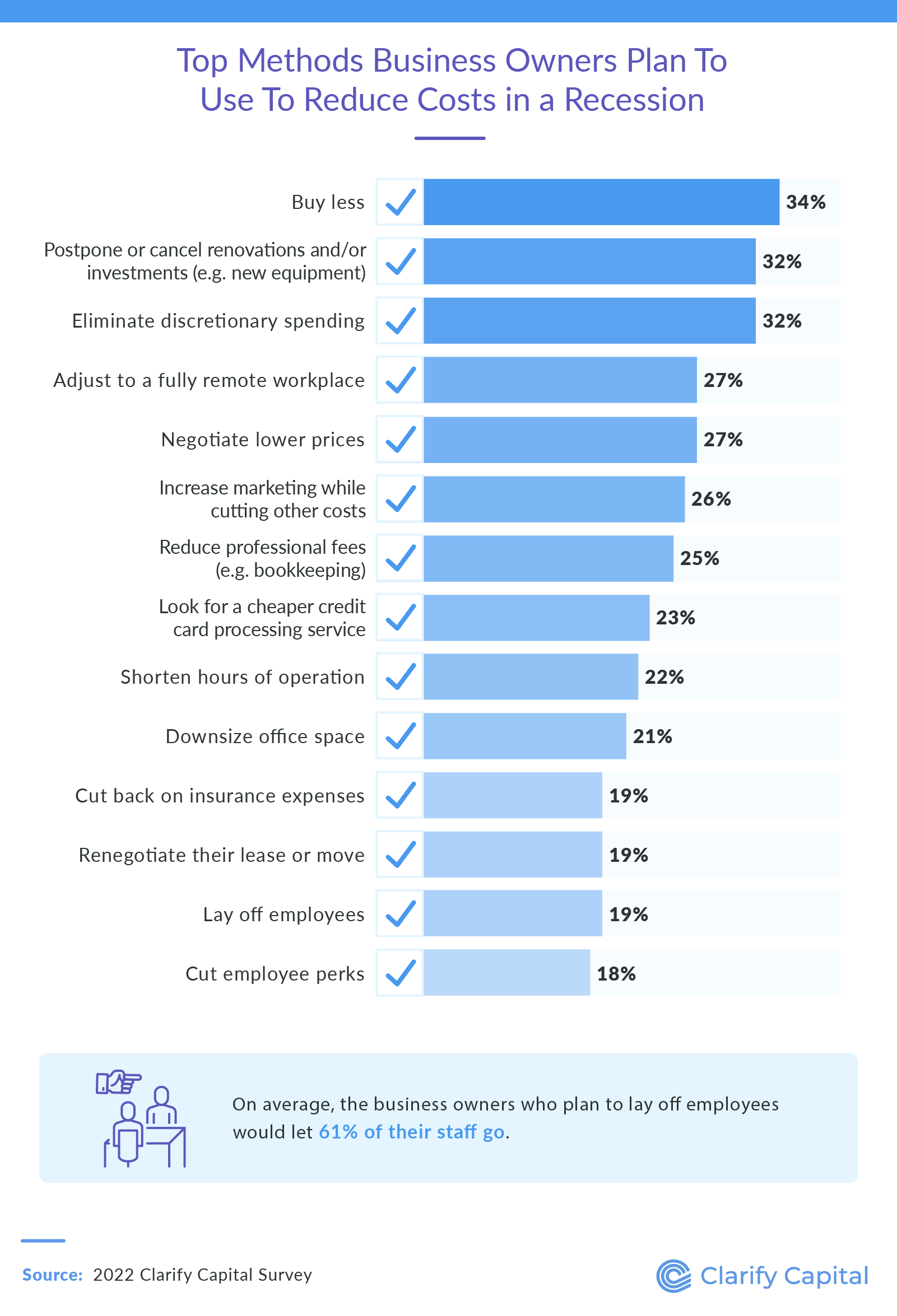 In addition to bringing in new clientele, some businesses planned to cut their workforce to save on operating costs. Sixty-one percent of respondents identified “quiet quitters” among their staff, who may be some of the first to be let go. Businesses between three to five years old were the most likely to need to lay off employees during a recession.

How Do Business Owners Feel About the Future?

Many business owners have already started preparing for a recession, but what impacts do they expect to see when it hits? We asked their opinions on inflation and what it might mean for their finances. 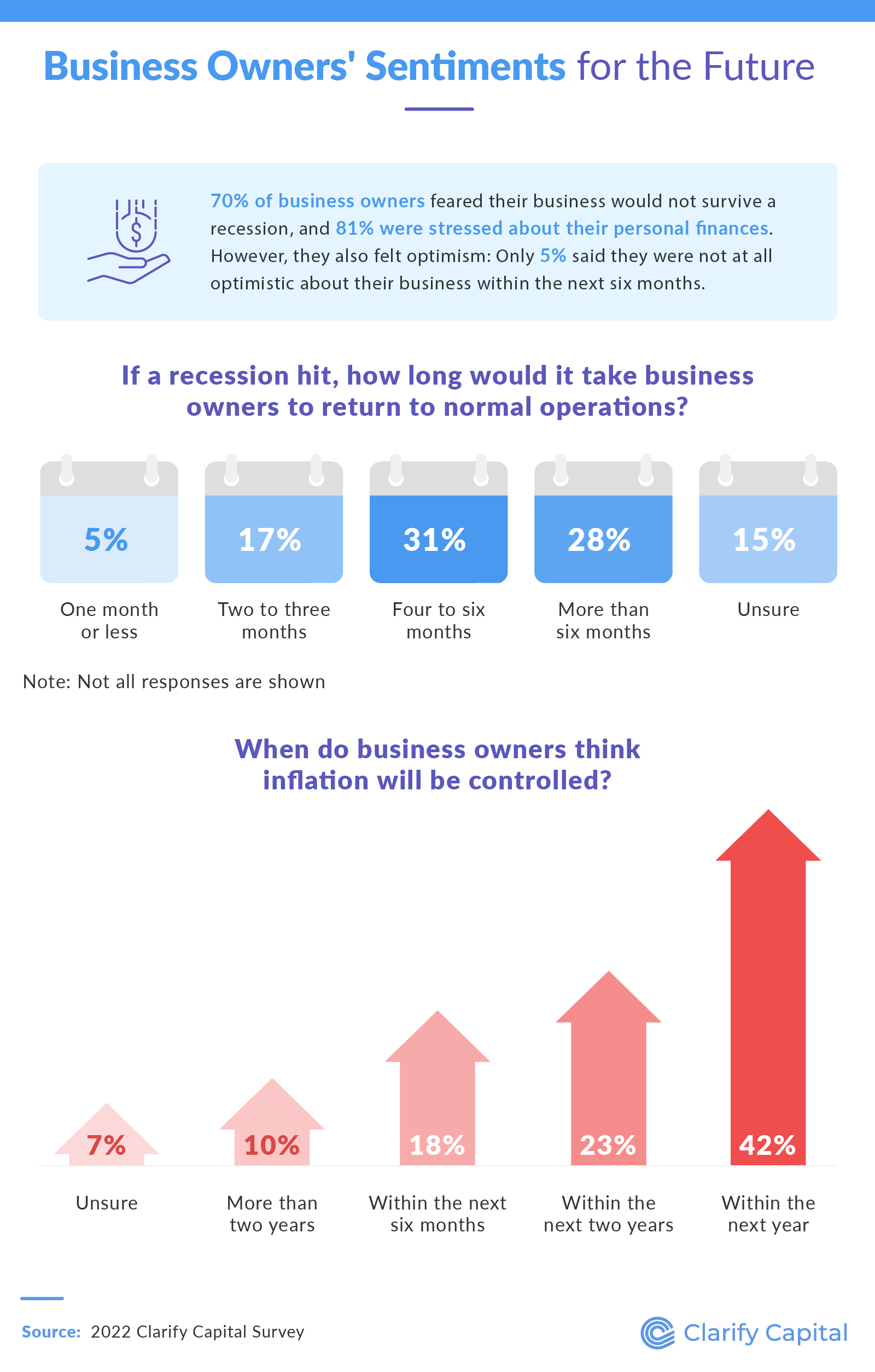 The age of the business also affected how concerned the owner was about its ability to survive a recession. Businesses open for 10 years or more were the least likely to fear their business wouldn’t survive, likely based on experience. Of the 30% of respondents who didn’t fear their business would close, estimates varied about how long it would take for operations to return to normal, but most expected it would take four to six months. Owners of businesses that had been open for over 10 years were more likely to say it would take longer, while half of those who said it would take just two to three months owned newer businesses that had only been open for three to five years.

Recessions Can Hit Hard, But Businesses Are Optimistic

Agreeing with economists, most small business owners believed a recession is coming soon — whether in the next few months or years. A recession can have resounding impacts on small businesses, many of which have already been struggling recently due to the pandemic and inflation. Businesses can prepare by increasing their savings, lowering their operating costs, or changing their marketing strategies to bring in new clientele.

Whether you're a confident business owner or a worried entrepreneur, you can take steps to secure your future by securing capital or finding a business consultant. If inflation levels out in the near future, a recession may have less impact than expected. Still, it’s always best to be prepared.

Clarify Capital conducted a survey of 1,017 micro to medium-sized business owners about their perceptions on an impending recession.

If you enjoyed our findings about businesses preparing for a potential recession, please feel free to share this article. Just be sure to link back to this page as a credit to Clarify Capital.