A Wave of Tech Layoffs

Some people are natural-born entrepreneurs, while others need a little extra push to become one. This push might occur as a layoff or firing — so how are the many tech workers who have recently been let go from their jobs responding to their newfound freedom?

To find out, we surveyed over 1,000 tech workers who were laid off during the pandemic and have since started their own company. Read on to discover what their motivations were for becoming their own boss, how they raised the necessary capital, and what challenges they faced in the pursuit of establishing a prosperous business.

Out on Their Own

Let’s look at why these tech workers wanted to start their own companies and assess how long it took to build them after being let go.

For both men and women, professional growth was the primary motivation to start a new business. Starting your own business is a great way to become a more well-rounded, knowledgeable, and accomplished professional. It helps if you take certain steps first, like mapping your finances, consulting a mentor or advisor, and ironing out a concrete business plan for your best chance at success.

For 40% of respondents, the idea to start a company came between six and 12 months after getting laid off. Nearly one-third had their lightbulb moment even sooner — in under six months — and the rest took a year or more to decide that owning a business was the next logical step in their career. Baby boomers, however, were the quickest to switch from employee to owner, while Gen Zers took the most time to mull over their next move. Perhaps an older worker’s professional experience makes the move to becoming a self-starter seem less daunting.

Wanting to start a business is one thing, but having the funds to do it is another. So how did respondents raise the necessary capital to get things going, and what other challenges did they encounter along the way? 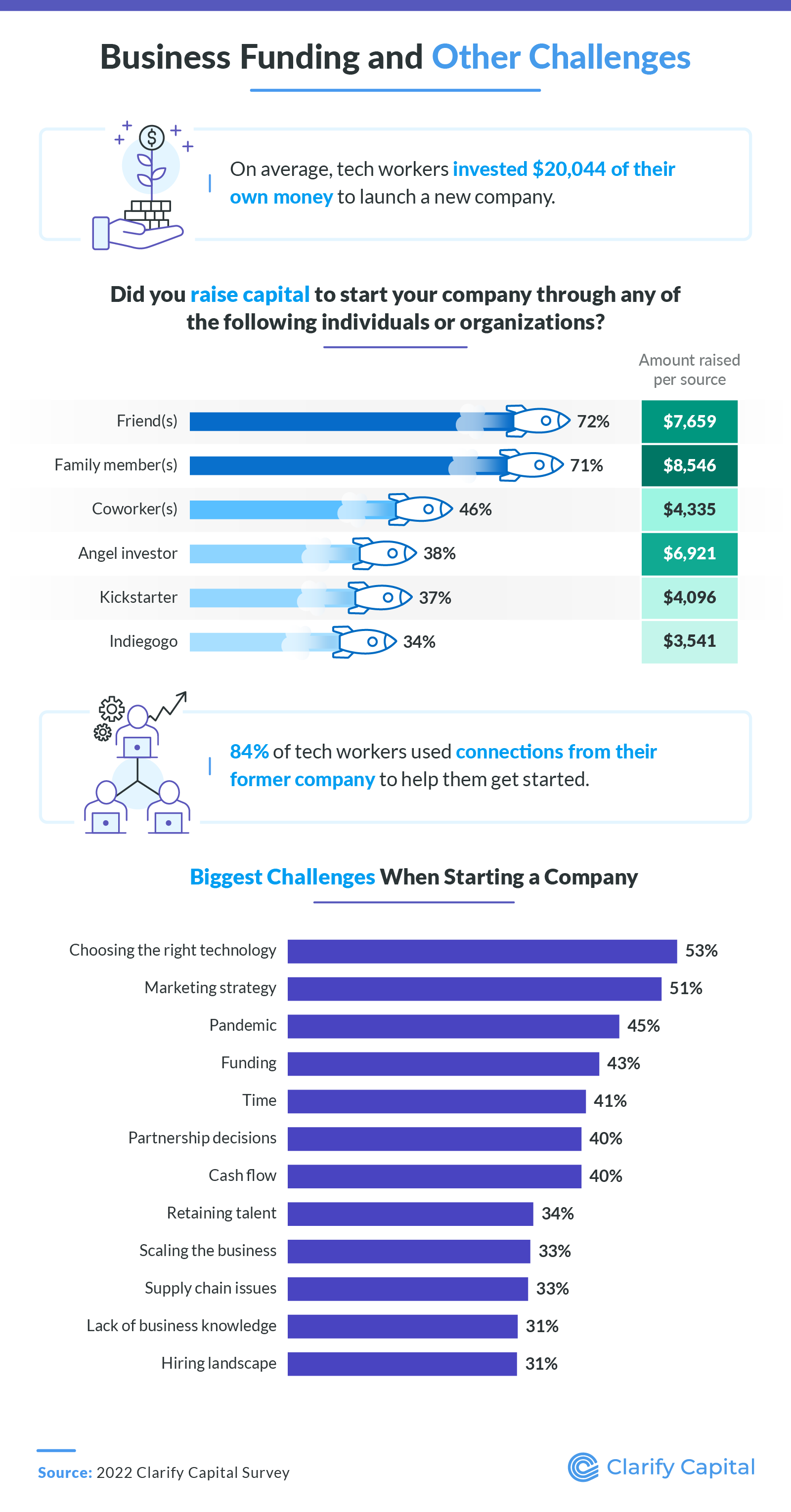 Before consulting other financial sources, respondents invested over $20,000 of their own money on average to launch their businesses. More than 70% of them brought friends and family into the mix, raising between $7,600 and $8,500 more. Most tech workers also capitalized on connections from their former company to accelerate their new venture (84%). People also relied on coworkers, angel investors, and crowdfunding platforms but to a lesser extent.

While no business can launch without enough capital, funding was only the fourth most significant challenge for these tech workers when starting a new company. They found choosing the right technology, building a comprehensive marketing strategy, and dealing with the effects of the pandemic trickier issues to handle. With many well-established businesses suffering post-COVID consequences, like rising inflation, supply chain problems, and labor shortages, the businesses conceptualized in 2022 are sure to face difficulties as well.

Show Me the Money

Once you set up your business, you can (hopefully) reap the rewards. How long did it take for customers to start walking through the door, and how much more did respondents make in a year as entrepreneurs compared to their last job? 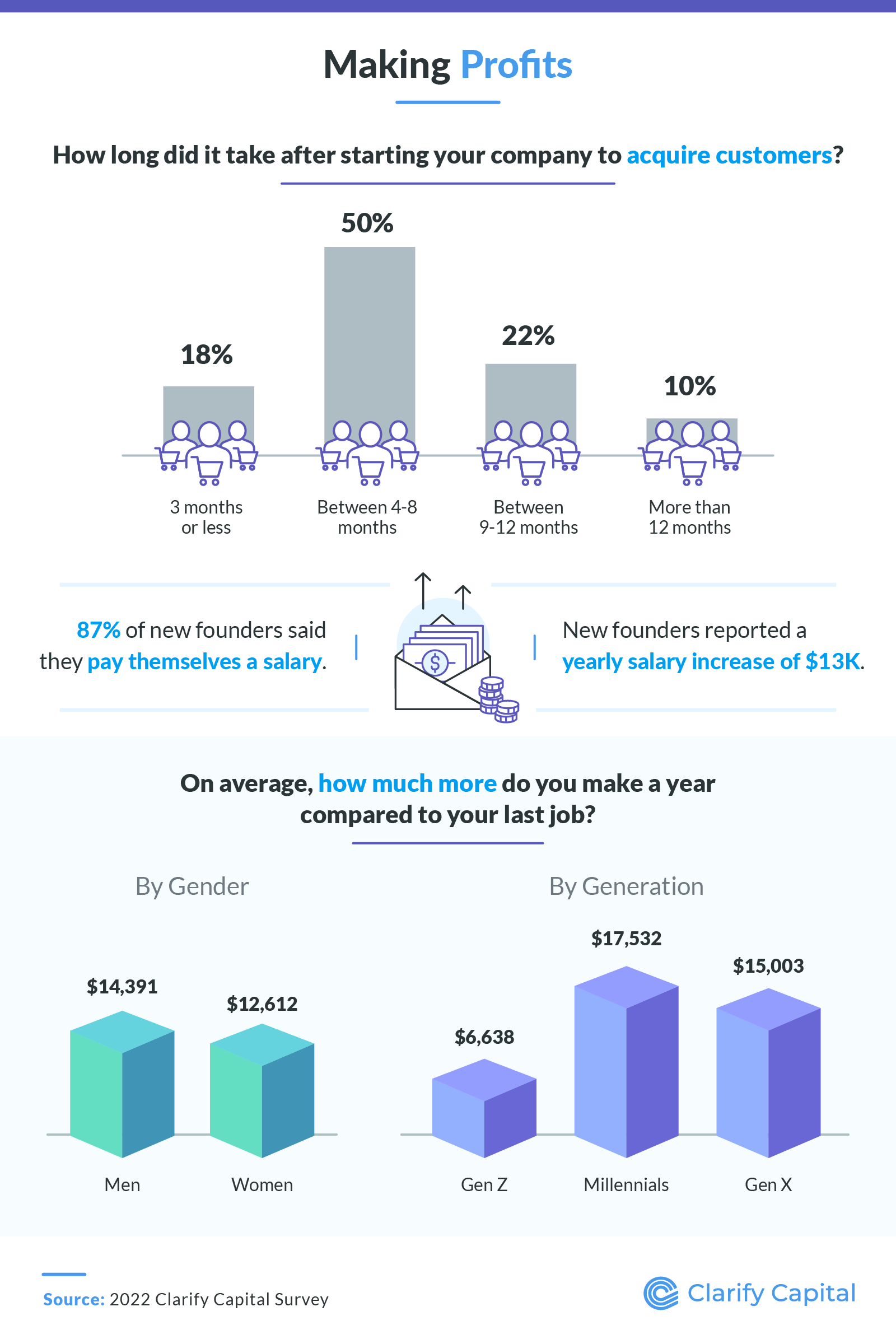 Nearly all respondents started acquiring customers within one year, while half said it took them four to eight months. If you don’t see success in the first three months, don’t fret — less than 20% saw their first customers within this time frame.

Keep looking forward to that eventual salary increase, which we found to be around an additional $13,000 per year. Millennials generated the most income compared to their previous jobs, making over $17,000 more per year as business owners. Gen Zers had the slowest starts, collecting just over $6,500 more per year than they did as employees.

A Leap of Faith

Starting your own business is exciting, but regret can sometimes creep in with all that new responsibility. How did entrepreneurs handle their emotions in the wake of such an ambitious undertaking? 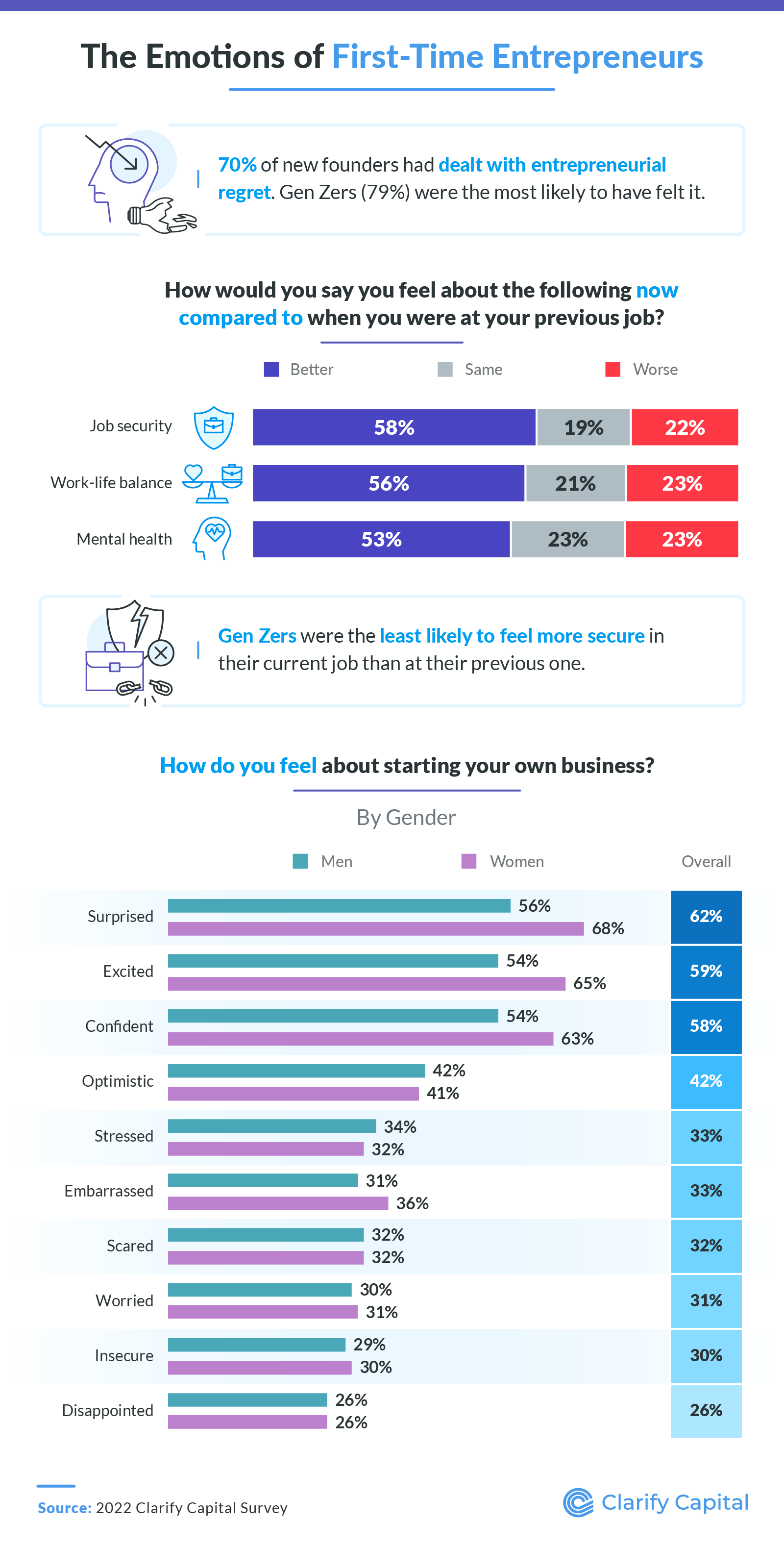 About 1 in 5 American workers who have recently quit their jobs have felt significant feelings of remorse; it’s a phenomenon that’s been dubbed “The Great Regret.” These feelings can also happen among those who tried to start a business after being fired or laid off.

Most new founders we surveyed went through a period of entrepreneurial remorse (70%). The ones who felt regret were also the least likely to feel better about their job security, work-life balance, and mental health. Nonetheless, more than half of our respondents said they felt better about all three aspects.

On another positive note, the top four emotions reported by more than half of those who started a business after losing their job were surprise, excitement, confidence, and optimism. The rest were negative emotions, like stress, embarrassment, and fear, but those feelings bogged down only one-third or fewer respondents. That’s why positivity and confidence are key assets of any successful business owner.

Growing Into the Role

Pursuing an entrepreneurial lifestyle can feel quite fulfilling, but finding success isn’t always easy. Many see it as an opportunity for professional growth and a way to make more money. On their journey, they’ll consult friends, family, and even connections from their former company for a financial boost when getting started. While funding is crucial, other factors like choosing the right business technology, marketing strategy, and navigating the consequences of the pandemic make building a business from the ground up quite challenging.

Nonetheless, many found success within their first year of business. Most started acquiring customers within eight months and ultimately reported making more money than they did at their previous job. The majority also felt positive emotions when starting their new businesses, allowing them to tackle their undertaking with the right mindset. While our sample provides an in-depth analysis of tech workers transitioning to business ownership, any dedicated person with the right plan, resources, and attitude can achieve the entrepreneurial dream.

For this campaign, we surveyed 1,007 tech workers who lost their jobs during the pandemic and have launched their own companies since. Among them, 52% were men, and 48% were women. The generational breakdown was 25% Gen Z, 36% millennials, 25% Gen X, and 14% baby boomers. For short, open-ended questions, outliers were removed. The margin of error was plus or minus 3%, with a 95% confidence interval.

We help business owners, entrepreneurs, visionaries, innovators, and everyone in between secure the funding they need to pursue their passions. Whether it’s a loan or line of credit, we’re here to help you cover whatever comes up.

If you know someone trying to make the leap from employee to employer, feel free to share our findings with them. We ask that you do so for noncommercial use only and provide a link back to this blog page so the contributors can earn credit for their work.