America’s Most Trusted Business is Amazon

Where Americans Put Their Trust

Brands must establish trust with their consumers to succeed in today’s economy. So, which ones do Americans trust? Why, or why not? To determine which U.S. industries are the most trustworthy, we consulted the Better Business Bureau (BBB) and then surveyed over 1,000 Americans about their opinions about different industries and specific brands.

Let’s see how businesses might build more trust with consumers and why they should.

First, we’ll look at the industries Americans trust most, using the percentage of A-rated businesses within each industry according to BBB. 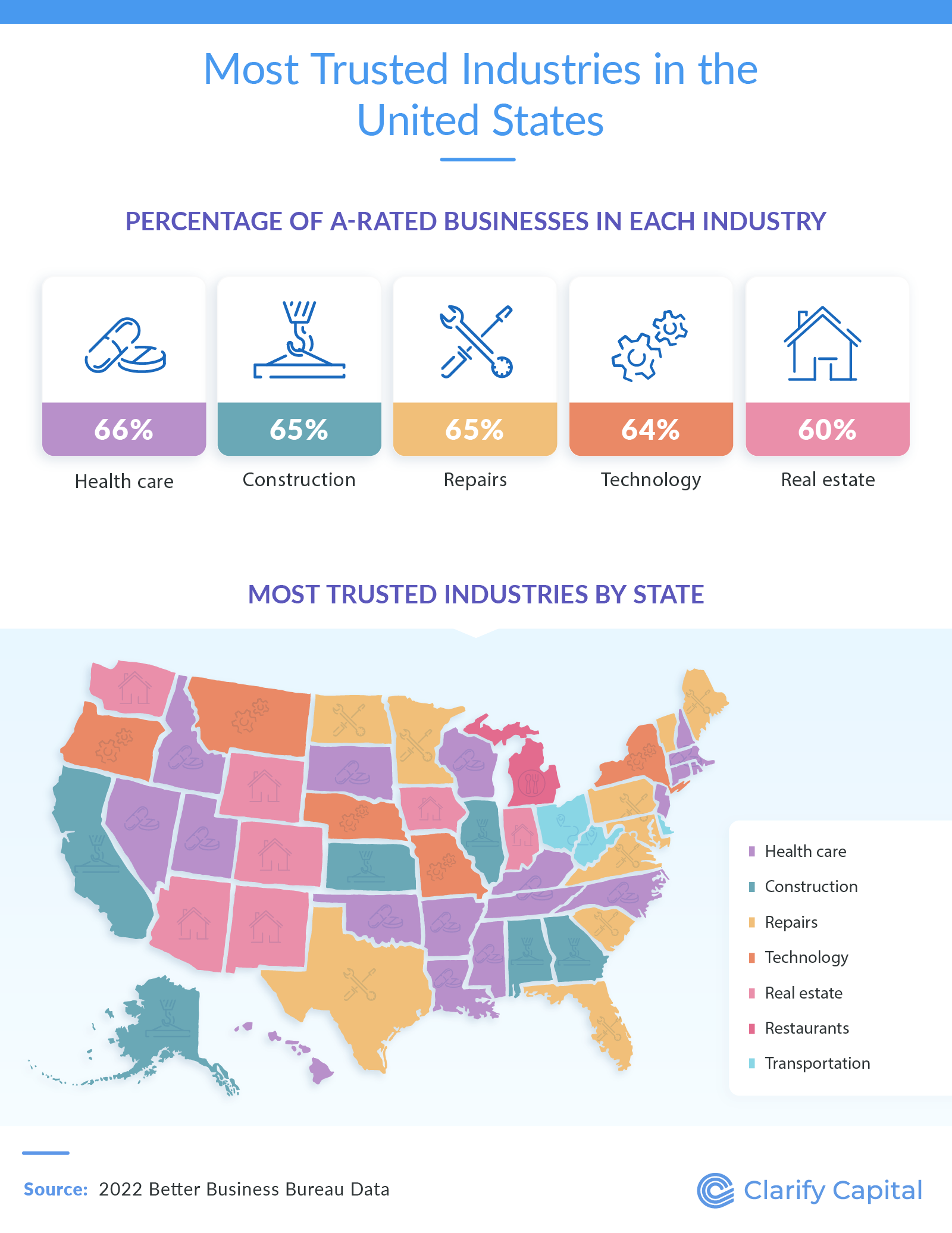 Technology and real estate rounded out the top five, with 64% and 60% of businesses earning A-ratings, respectively. This finding is surprising, considering trust in the tech industry has been historically low recently. Colorado was the state with the highest percentage of A-rated tech businesses (81%), while Kansas had the most A-rated real estate businesses (95%).

Unfortunately, the only state that most trusted its restaurants was Michigan. Transportation didn’t get much appreciation either, with Ohio and West Virginia being the only states that trusted it more than any other industry. 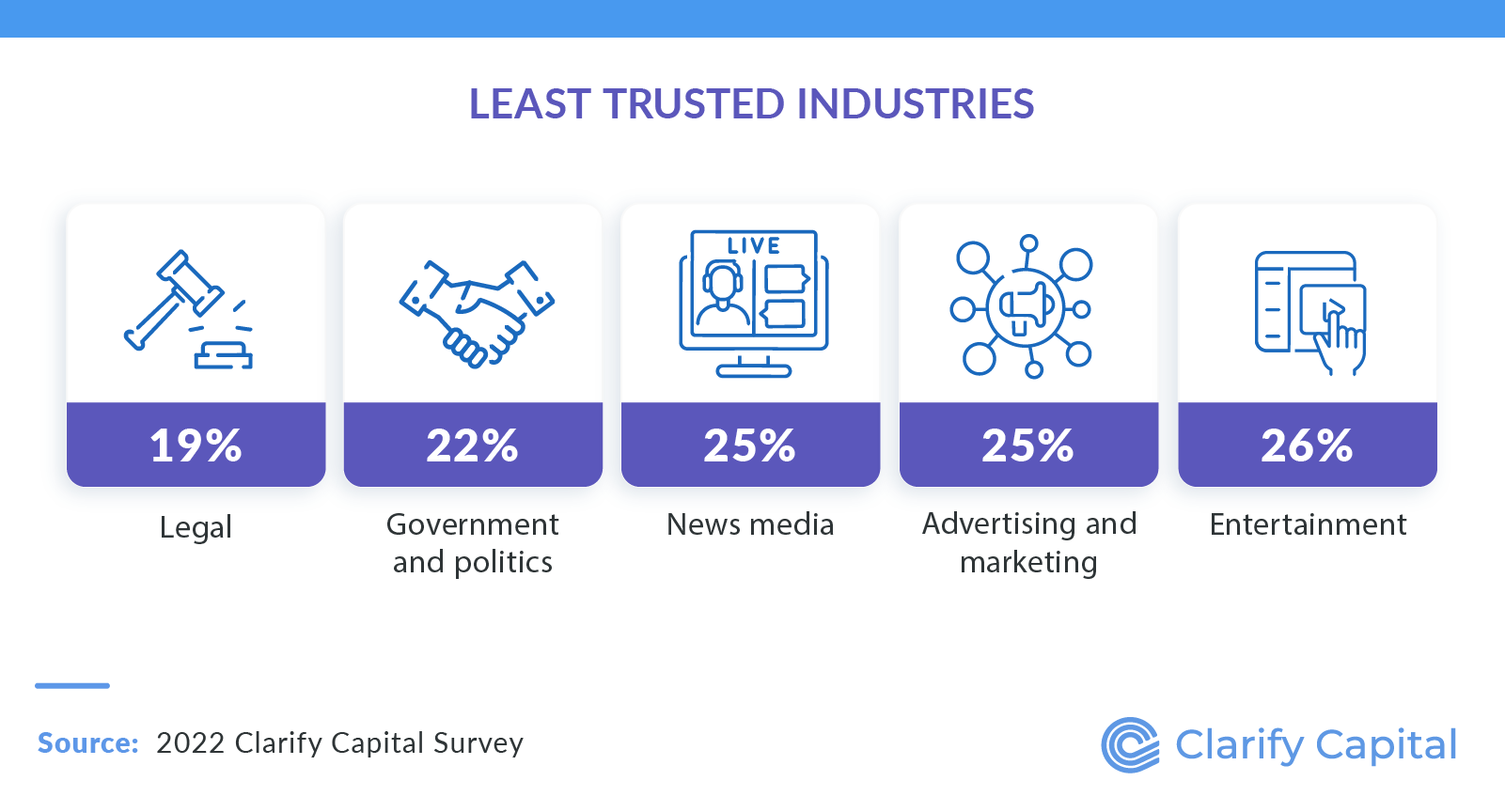 Our study also revealed the industries that Americans trust the least. According to our survey results, the least trustworthy was the legal industry, with only 19% of respondents saying they trusted it. Government and politics were the second-least trusted industry, which came as no surprise; trust in the government has been low for most of the 21st century.

News media only garnered the trust of 25% of respondents, speaking to the nation’s rapidly declining confidence in the media in recent years. It tied for third alongside advertising and marketing, while the entertainment industry ranked fourth.

Even among the most trusted industries, Americans trust some brands more than others. These are the most and least trustworthy brands across six major industries. 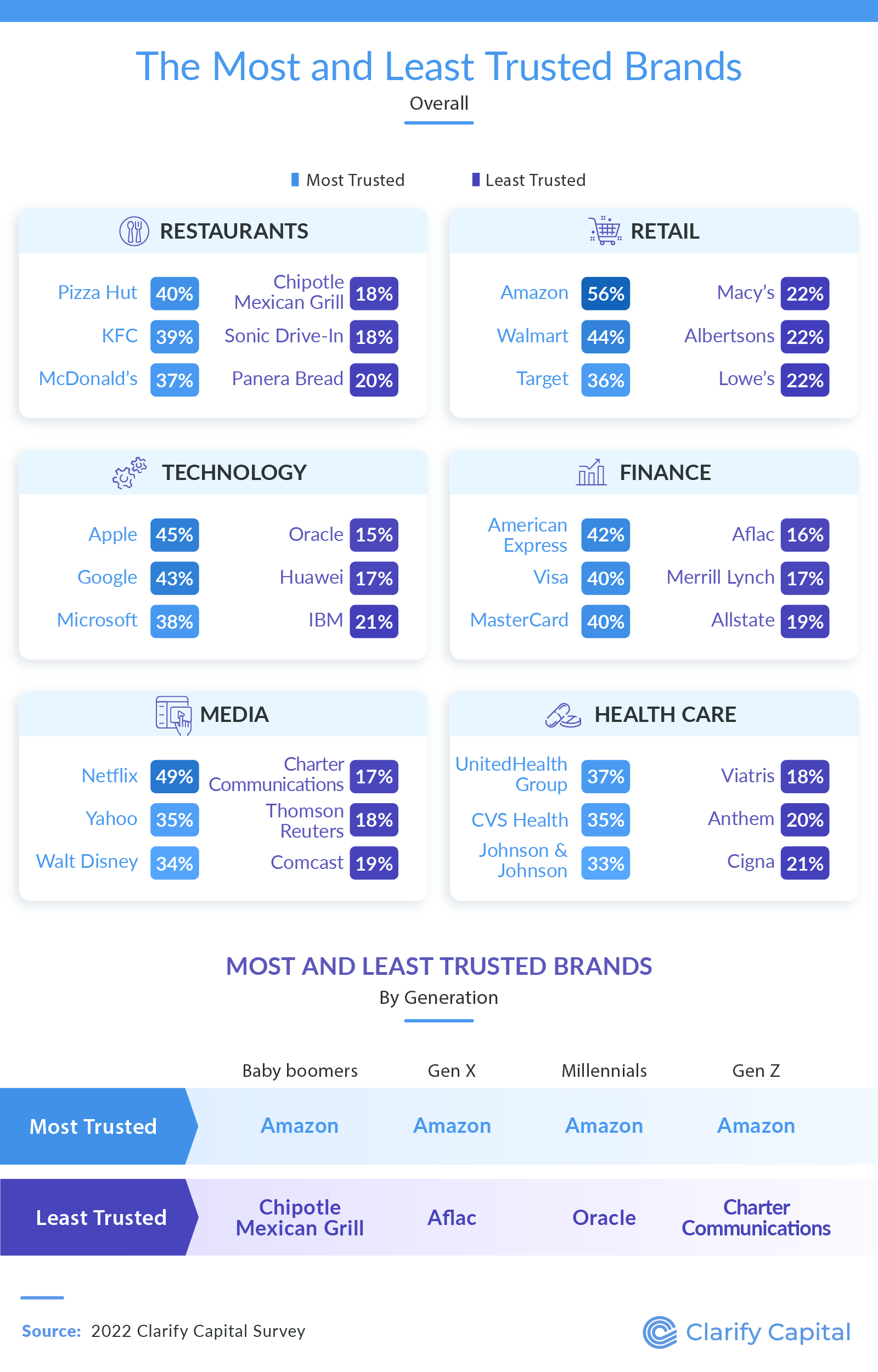 Tech and e-commerce behemoth, Amazon, was the most trusted brand by all generations surveyed. It was also the only brand across all six industries that more than 50% of respondents found trustworthy. Despite increasing debate about their labor practices, Americans see something special in Amazon; an estimated 166 million have Amazon Prime memberships.

Among restaurants, Pizza Hut, KFC, and McDonald’s were the most trusted brands, while Panera Bread, Sonic Drive-In, and Chipotle held the least of Americans’ trust. Chiptole’s spot as the No. 1 least trusted could be due to reported food safety issues in the last few years.

Netflix was by far the most trusted media brand, according to 49% of respondents, speaking to its reliability and long-standing history. Yahoo and Walt Disney took the second and third spots, while Comcast, Thomson Reuters, and Charter Communications ranked least trustworthy.

Technology giants Apple and Google were the most trusted tech companies, landing Microsoft in third. Meanwhile, IBM, Huawei, and Oracle were the least trusted in this industry.

The Advantage of Authenticity

How important is it for a brand to be trustworthy? Next, let’s find out how companies can benefit from being perceived as trustworthy and how they can foster it. 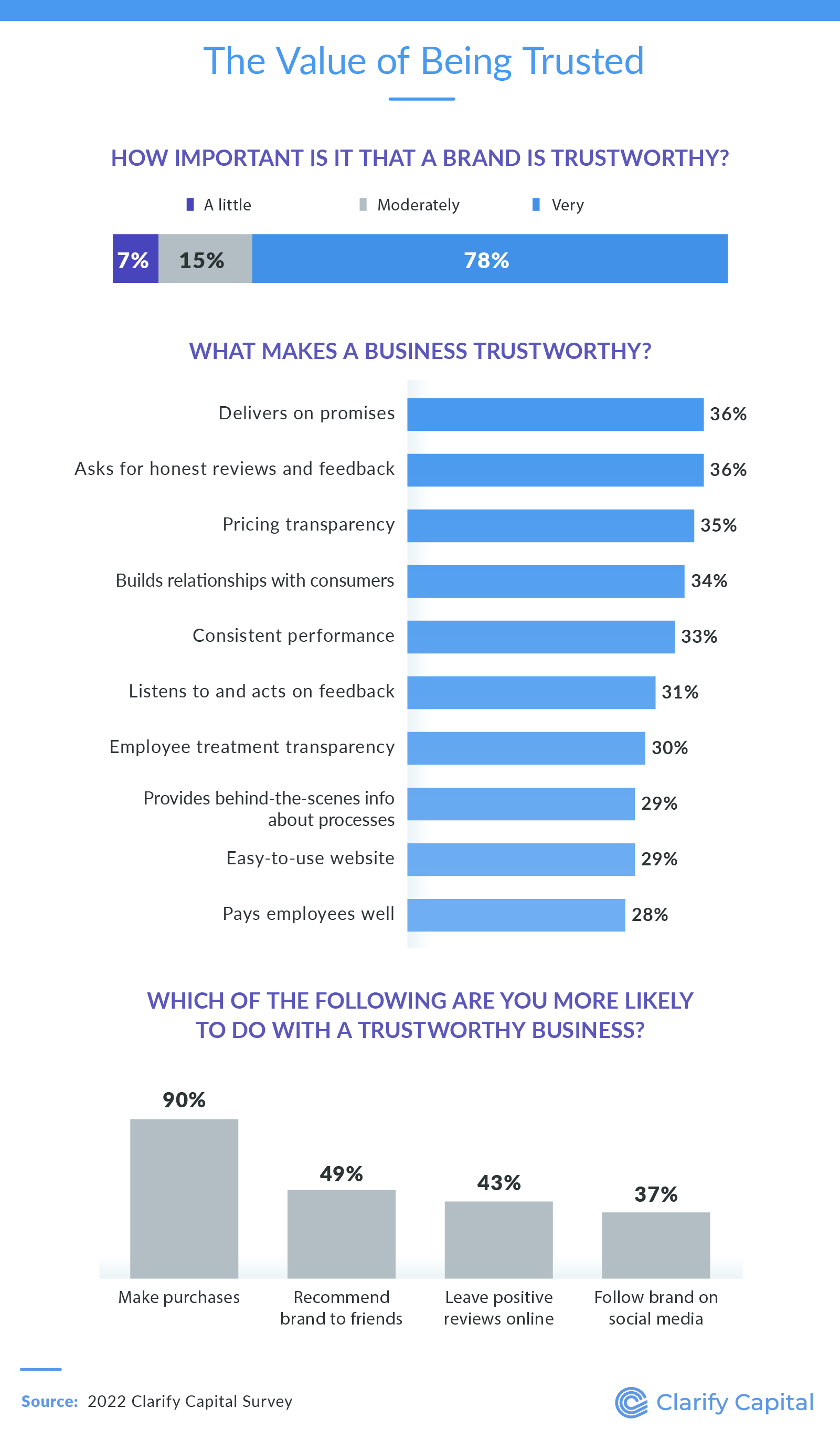 When asked about the value of brand trustworthiness, most respondents (78%) said it was very important to them. It was at least moderately important to 15%, while only 7% said it was a little important. Although given the option, no one felt it was unimportant.

Nearly everyone we surveyed (90%) said that trust makes them more likely to purchase from a business. Forty-nine percent of respondents said they’d be more likely to recommend a trusted brand to friends, which is something companies should strive for. Even in the age of high-tech advertising, word-of-mouth marketing is still a powerful asset.

As for the top indicators of trustworthiness, respondents believed that delivering on promises, asking for honest reviews and feedback, and pricing transparency were the top three factors. However, men and women ranked these indicators differently. Men didn’t place “delivering on promises” among their top three (though women ranked it at No. 1). Instead, male respondents viewed a company’s ability to build relationships with its consumers as more important.

The Landscape of Trust

Building consumer trust can significantly affect a company’s growth and success. When consumers trust brands, they’re more likely to buy from them, recommend them to their friends, or leave helpful reviews for other consumers or the company.

Americans trust some industries less than others, especially entertainment. This might make it harder for brands in those categories to succeed, but it’s possible with the right tools. Netflix, for example, was trusted 14 percentage points more than any other company in its industry. Perhaps they know the secrets to success: transparency, delivering on promises, and building relationships with their customers.

To begin, we looked at business listings on the Better Business Bureau in the five biggest cities of each state. We then compared the total number of listings to the number of A-rated businesses to determine the percentage of trusted businesses in each industry. Additionally, we completed a survey of 1,046 Americans. Sixty percent were men, and 40% percent were women. For a generational breakdown, 8% were baby boomers, 23% were Gen Xers, 59% were millennials, and 10% were Gen Zers.

We help business owners achieve the American dream by providing loans with fast approval and low-interest rates. Businesses can apply for lines of credit, SBA loans, working capital loans, equipment financing, and more with approval in as little as 24 hours.

If you enjoyed our findings about America’s most and least trusted industries and brands, please feel free to share for noncommercial purposes. Just be sure to link back to this page as a credit to Clarify Capital’s team.