Getting America Back to Work

Now that the stay-at-home orders of the pandemic have long passed, many business owners and managers are ready for their teams to return to the office. But after enjoying the comforts of home for so long, are their remote workers prepared to make the change? We surveyed over 1,000 Americans currently working from home to find out how likely they are to come back to the workplace and what they might ask for in return. 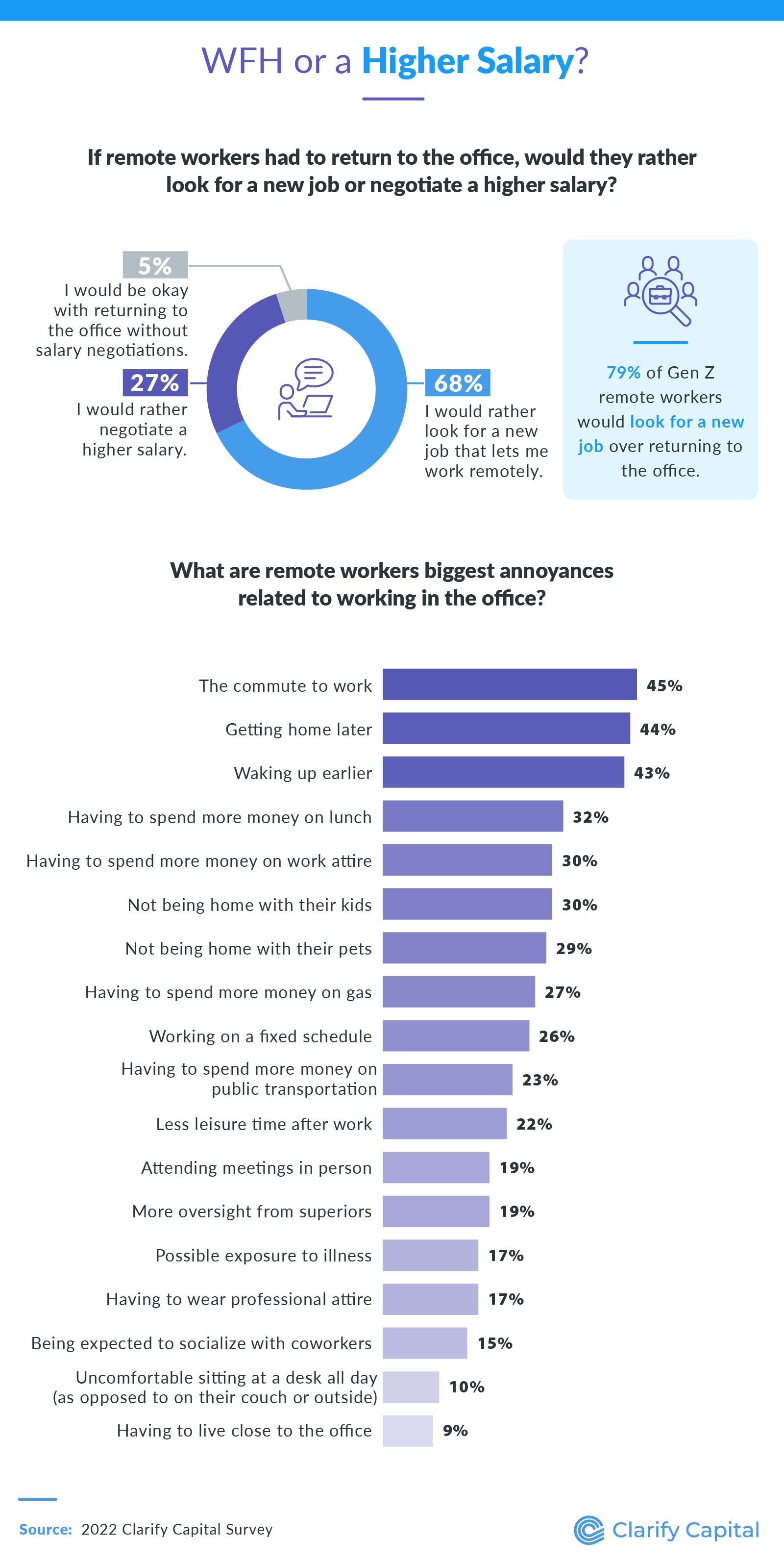 Before the pandemic forced many Americans to switch from their workplaces to their homes, most office workers were used to getting dressed, commuting, and buying lunch every weekday. But now that they’ve tasted a better life, they don’t want to go back to the way things were. Commuting to work was the biggest annoyance that 45% of the remote workers we surveyed were reluctant to return to. Nearly as many said they’d be just as troubled by getting home later and waking up earlier.

Who would want to give up the freedom to roll out of bed and start work in their pajamas every day with a homemade morning coffee? Certainly not business and information technology (IT) employees. They were the most likely to name waking up earlier as the biggest annoyance of returning to the office. The commute was what most irritated employees in education, finance, insurance, and health services.

Understandably, when we asked remote workers what they would do if their bosses wanted them to return to the office, only 5% said they’d be okay with the change. Most people (68%) said they’d prefer to look for a new job, and more than one-quarter said they’d try to negotiate higher pay (27%). Clearly, getting workers back to the office will be a challenge. 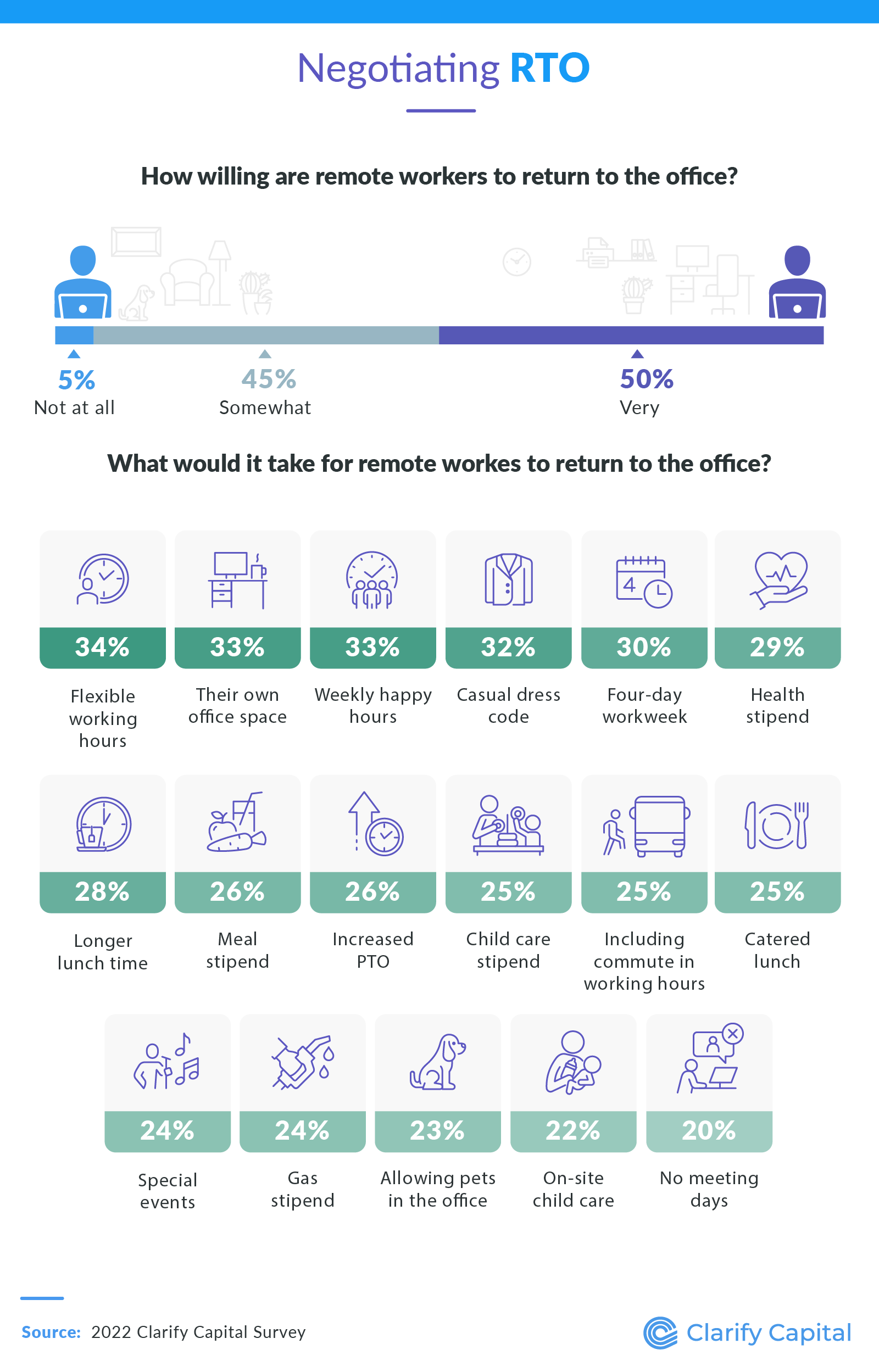 Even after our respondents shared all their annoyances related to in-office work, only 5% said they were not at all willing to return. Many sentiments were quite the contrary; 50% were very willing to go back, and 45% were at least somewhat willing. Could it be that they’re also looking forward to negotiating a higher salary in return?

Actually, there were some other perks remote workers said they’d angle for in exchange for coming back to work. Most of them named flexible working hours (34%), and nearly as many were interested in a four-day workweek (30%). This change was especially attractive to people working in finance or insurance (34%).

Rather than schedule adjustments, one-third of remote workers preferred the prospect of a private office space. And just as many wanted weekly happy hours — who can blame them after being cooped up at home for so long without a water cooler to chat around? Health service workers were most likely to choose the happy hour perk, while personal office space was the most common goal among people in education, business, and IT.

What’s It Going To Take?

Workers are in no rush to get back to the in-person workplace, but there might be ways for managers to incentivize it. Many employees wouldn’t turn their noses up at a pay raise, but others might simply want more flexibility built into their schedules. Those who have gotten used to the peace and quiet of working from home might appreciate more personal space at work, while those who have felt isolated from their co-workers could use some scheduled time during work hours to socialize. However, these preferences vary, so managers may want to reach out to their employees and find out what they’ll need in order to return to the office.

Clarify Capital surveyed 1,005 remote employees about what it would take for them to return to the office. The generations were: 11% baby boomers, 16% Gen Xers, 44% millennials, and 29% Gen Zers. Their industries were business and information technology (34%), finance and insurance 20%, health services (10%), and education (10%).

If you’ve got the vision, we’ve got the resources to make it a reality. Let Clarify Capital make sure your finances match your ambitions.

If you’d like to share this data with someone who might be interested, feel free to do so — as long as your purposes are non commercial and you include a link to this page.